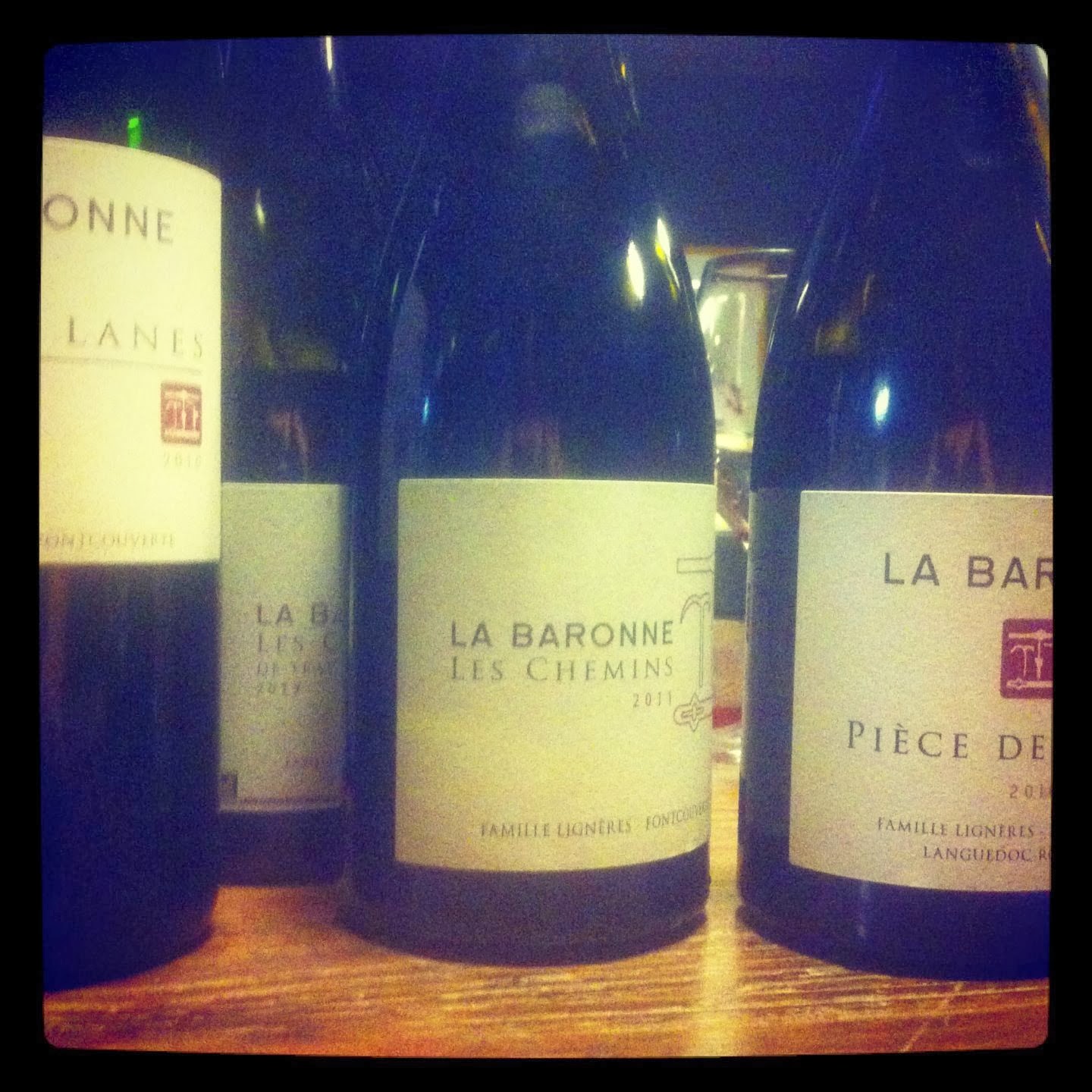 When we first moved to our new house in Moux our focus was fully on the refurbishment needed to make the house habitable to the standard we wanted - not an easy or quick job.  When we finally got our heads above the parapet we started to explore our new surroundings - and our new surroundings, our village, contain a wine estate of undoubted quality.

Chateau La Baronne is owned by the Ligneres family, a family of doctors, pharmacists and winemakers. We all know that wine is made with care and love and chemistry so perhaps they know a thing or too, but there are no pharmaceuticals involved because La Baronne is a certified bio-dynamic wine estate which means not only totally organic but also in tune with the phases of the moon. That means bottling, harvesting and pruning on a fruit day or flower day as best befits the activity.

The wines are not the cheapest you will find in the region but they are cheap compared to their equals in the rest of France and the wider world - what is undoubted is that they are delicious and extremely well made.

The grapes, both white and red, are classic Languedoc varieties.  Rousanne, Grenache Blanc, Bouboulenc and Vermentino blends for the whites and Grenache Noir, Carignan, Mourvedre and Syrah for the reds.

The family favourite is the Carignan and they are 'constantly striving to heighten the expression, finesse and elegance of this emblematic variety of the region' (a quotation from the estate website).  The top wine of the estate is Piece de Roche - a 100% Carignan made from vines planted in 1892.  These were some of the first new vines planted on American rootstock after the phylloxera crisis at the end of the 19th century wiped out the vineyards of Europe.

I find it amazing that I can drink wine made from grapes grown on vines planted so long ago. They don't actually know how long these vines will keep on producing grapes of high quality because there aren't any vines older than this in France - it will be an ongoing adventure and one I hope to keep pace with. 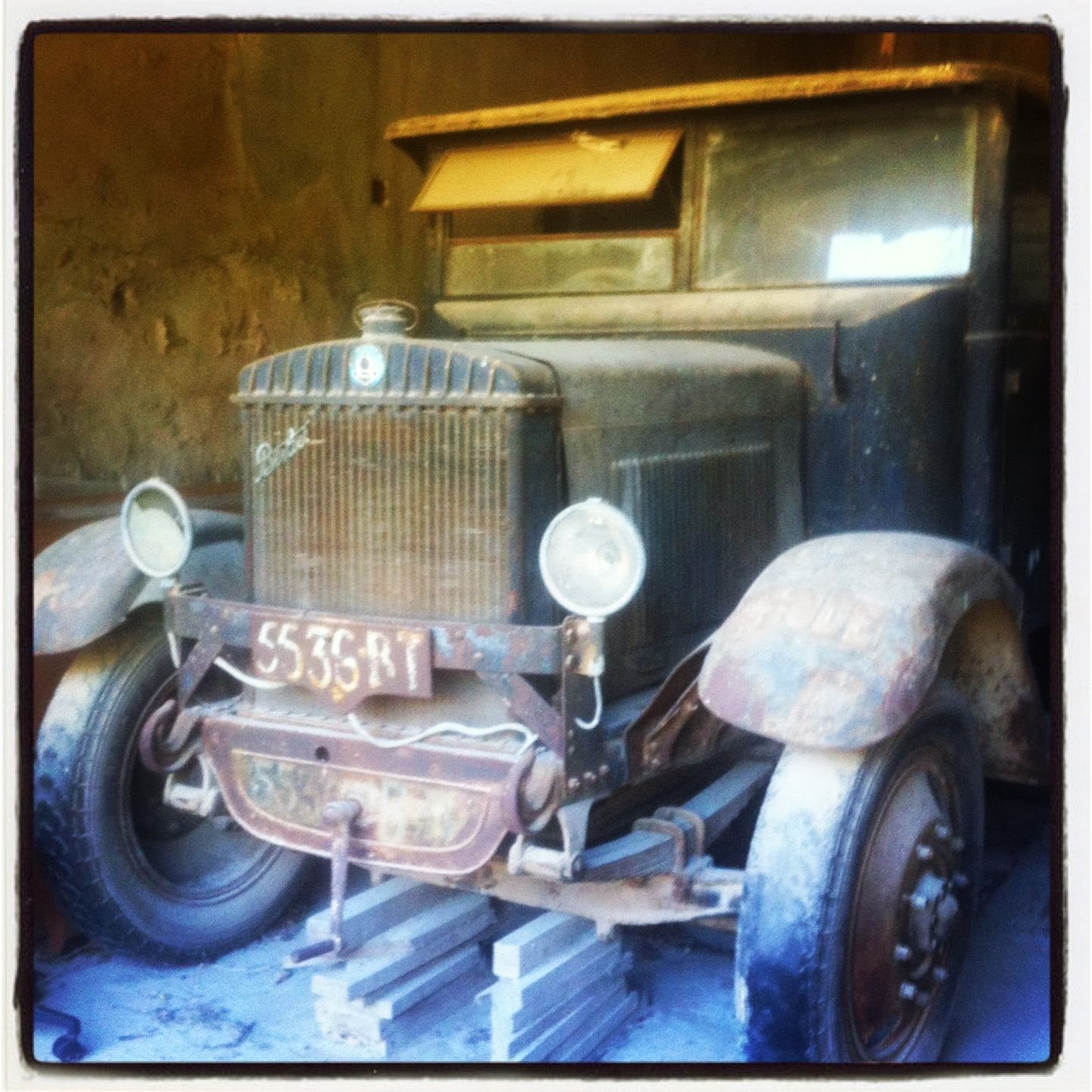 In one of the barns at the estate is this beautiful old 'camion'.  It was used to deliver barrels of wine to clients in the early part of the 20th century.  It replaced the old horse and cart and represented the future back in the 1920's.  Now it just gathers dust, but it has lost none of it's charm and I adore that they have kept hold of it even though it now has no practical use.  It is part of their history, part of their heritage.

The estate isn't set up for visitors but that doesn't mean you wouldn't be welcomed and given the chance to taste these fabulous wines.  I would suggest a call in advance to make sure they know you are coming (English spoken).

Posted by Peter Woodcock at 8:30 AM No comments: 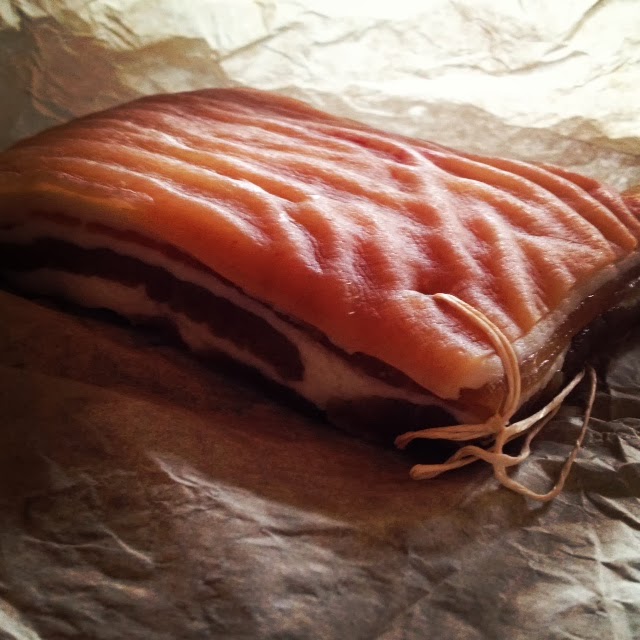 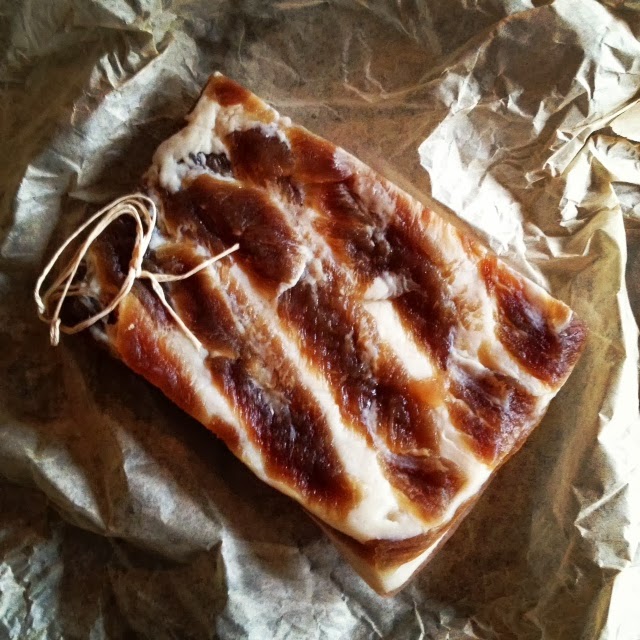 Home curing, home smoking, making your own sausages - it's all the rage at the moment.  You can't turn on the TV, open a blog or a cook book without coming across an article about doing it yourself.  I am no exception.

Since moving to France I have made jam, compote and granola for the 42rvh breakfast table, made tomato sauce and pickled vegetables and cured my own olives - all from the excess of local production at the end of each growing season.  I have also successfully cured salmon using wild fennel picked from the countryside where I walk my dog.

But I have never tried curing meat - until now, and it is a lot easier than you probably think it is.  It came about due to various circumstances falling into place - a fabulous book on 'doing it yourself' which my lovely wife, Debrah, bought for my last birthday, an offer on pork belly at a local supermarket which resulted in 2kg of pork for only €12 and a bit of time on my hands in the off-season.

I cut the belly into 4 manageable pieces of half a kilo each.  We roasted one that evening for dinner, I froze one for later, I minced one to use in meatballs and I decided to have a go at making bacon with the last one.

The beauty of curing a relatively small piece of meat is that you can do the whole thing quite easily in a domestic fridge with little or no mess and no difficulty and the only other ingredients you need are salt, sugar and herbs.  I used a standard domestic freezer bag with a resealable top into which the meat would fit quite snugly.  I added my salt, sugar and chopped herb mix, sealed the top and rubbed the mixture all over the pork in the bag.  I then put it in a shallow bowl and popped it in the fridge.

Over the course of a week I turned it over every day and what started as a dry cure mix became a wet cure as the salt did it's job of drawing the moisture out of the meat.

After a week the curing is done.  Take the meat out of the bag and wash it thoroughly, then pat dry.  Make a hole in one corner with a skewer and with kitchen string make a loop to hang the meat, then hang it in a cool, airy place for a couple of days to firm up before wrapping it in greaseproof paper to store in the fridge for up to a month.

I was thrilled with the outcome.  Next, I need to make a smoker!


Notes;
For 500g of meat I used 110g of sea salt, 70g of brown sugar and 5 sprigs of rosemary.
Profesional curers use nitrates in the mix which helps to keep the pink colour in the meat but it is not essential.  It is available online from good suppliers.
Slice as thinly as possible and fry as bacon or cut into cubes and use as lardons.

Posted by Peter Woodcock at 2:50 PM No comments:

A recent trip to Marrakech got me thinking about the influence of French food culture on it's former colonies and vice versa.

I took a food market tour with a local guide (similar to the market tour and cooking day that I offer in Carcassonne, minus the cooking bit).  It was a fascinating three hours that covered all aspects of the local food culture and how it has been influenced by religion and outside invasion.  I would have to conclude that the Moors left a far greater legacy than the French.

My guide took me deep into the souks to places I wouldn't have ventured on my own.  We visited spice stores, pastry shops, olive and nut sellers, a local meat and fish market and a communal bread oven before finishing in the main square.

The etiquette of the making and drinking of mint tea was explained (heavily sugared and known as Moroccan whisky because of it's addictiveness - Moroccans have very bad teeth as a result).  I sampled harira (a staple soup), prickly pear from a street vendor, a snail stew also from a street vendor, a beef tangia (eaten by hand using bread as a spoon) as well as the olives and pastry and nuts.  The meat market had live chickens and rabbits which are slaughtered to order by the butchers - you can't get fresher than that.!

The tour finished in the crazy main square, Jemaa el Fna, an incredible nightly circus of market stalls selling everything from orange juice to sheep's head stew, from carpets to slippers to fake watches and bags, whilst snake charmers and henna painters vie for passing tourist business and touts try to persuade you into every small bar and cafe.  Wonderful, fascinating and slightly intimidating.

I know that in Vietnam (formerly Indochine) the baguette has become as much of a staple of the daily life there as it is in France - but I didn't see one single baguette during my week in Morocco.

The most famous dish of North Africa is of course the tagine (not to be confused with tangia) and it is interesting that North African food culture has made greater inroads into French cuisine than the other way around.  Tagine and couscous are very much everyday foods in France.  There is now a large Arabic population living in France - coming from Morocco, Tunisia and Algeria (a million French citizens moved back to mainland France from Algeria after independence there) so it is hardly surprising that they have brought with them their food.

I adore tagine.  It's subtle flavouring of spices is in marked contrast to British colonial food from Asia and the Caribbean.  A chicken tagine made with green olives and preserved lemon is a thing of beauty and incredibly simple to make.  This is the recipe I usually follow (courtesy of Winter on the Farm by Matthew Evans)

Preheat the oven to 160C
Heat the oil in a large casserole over a medium heat.  Brown the chicken on both sides and remove.
In the same dish cook the onion for 6-8 minutes until lightly caramelised then stir in the garlic and cook for a further minute.
Reduce the heat to low, add the cinnamon, cumin and coriander and cook stirring for one minute.
Add 250ml water to the dish, scrape up any bits from the bottom of the dish and add the chicken.
Add the olives and quince, cover and bake in the oven for about 90 minutes until the quince and chicken are tender.
Add the lemon, season with salt and pepper to taste and cook for a further 10 minutes with the lid off.
Serve immediately with rice or couscous.

The quince gives this tagine a wonderful sweet fragrant flavour but I know that it not always available for everyone.  You could use dried apricots instead but I find their flavour a little too strong and overpowering for the subtlety of the rest of the dish.  Fennel is a good addition as an extra vegetable and a good sprinkling of chopped coriander over the finished dish will not go amiss.
Posted by Peter Woodcock at 8:51 PM No comments:

Peter Woodcock
Carcassonne, Languedoc, France
One time accountant and Finance Director in London who found his niche and passion in food and wine in France. Owner and manager of acclaimed B&B at 42 rue Victor Hugo in Carcassonne. Now, it's all about fresh seasonal produce and discovering delicious local wines.