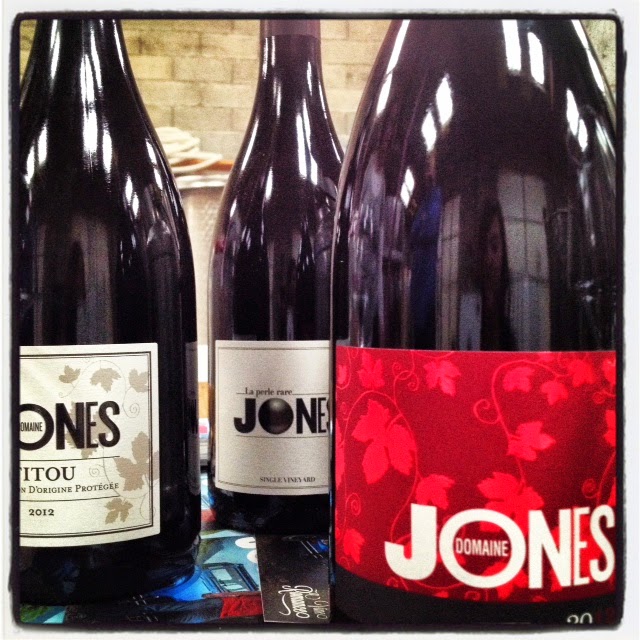 Deep in the heart of the Corbieres, in the village of Tuchan, Katie Jones is fomenting a fermenting revolution. In this deeply traditional corner of French viticulture, she is taking on the establishment by daring to be different.  In the process she is producing some of the tastiest, most refreshing and well balanced wines I have ever drunk and, as anyone who knows me will know, that is quite a lot of wine.

Katie worked in the marketing department of the local cave cooperative, Mont Tauch, for many years before deciding to buy her own vineyards and make her own wine.  She started very small with tiny plots of vines unwanted by bigger operations because the fields were difficult to access with machinery or the vines were getting old and producing lower yields or because the vines were not mainstream varieties or all three.  I expect the local vignerons looked upon this novice Englishwoman with amusement and no doubt a great deal of scoffing about the chances of her success. 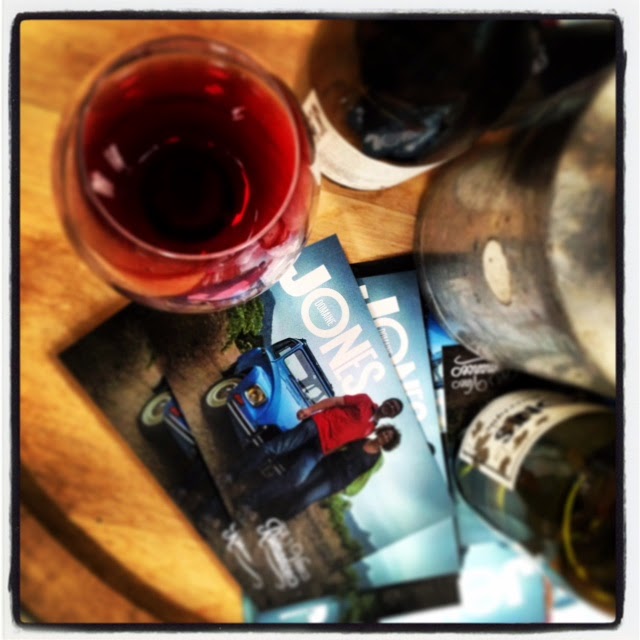 When, in the course of just a couple of years, success followed acclaim and her wines sold out, that scoffing turned to resentment and jealousy culminating in her cave being vandalised and her entire production of 2012 Jones Blanc being lost down the drains when the taps were opened on the vats it was stored in.  No-one has ever been brought to book for this despicable act although I expect everyone in the community knows who was responsible.

Many would have thrown in the towel.  After all, farming vineyards by hand, then making and selling wine is a difficult enough job in the first place without being faced with local hostility and obstinacy.

But there is a steely determination about Katie that should see her alright - far from giving up she has moved her operation to a more secure location, has just bottled her 2013 Blanc, has bought more plots of vines and expanded her range of wines and has ambitious plans that will continue to push her onwards and upwards. 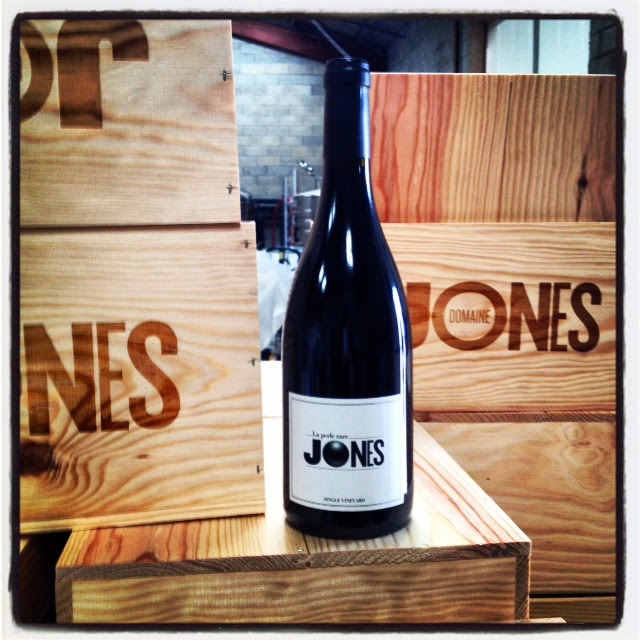 Her inventiveness and approach to wine making are also interesting and exciting, from experimentation with different grape types (see below - maccabeu) to different fermentation techniques, maturation and storage methods.  The branding of her wines is also perfect, helping them to stand out from the crowd and getting them recognised - good branding in wine is very rare indeed.

She is ably supported by her French husband, Jean Marc, who is in the process of extracting his vineyards from the cooperative to launch his own range of wines - revolution indeed - and despite what I have said above, there are plenty of local winemakers who are 100% behind her, not to mention fabulous reviews in the UK press from writers such as Jancis Robinson.  The future is bright for Katie. 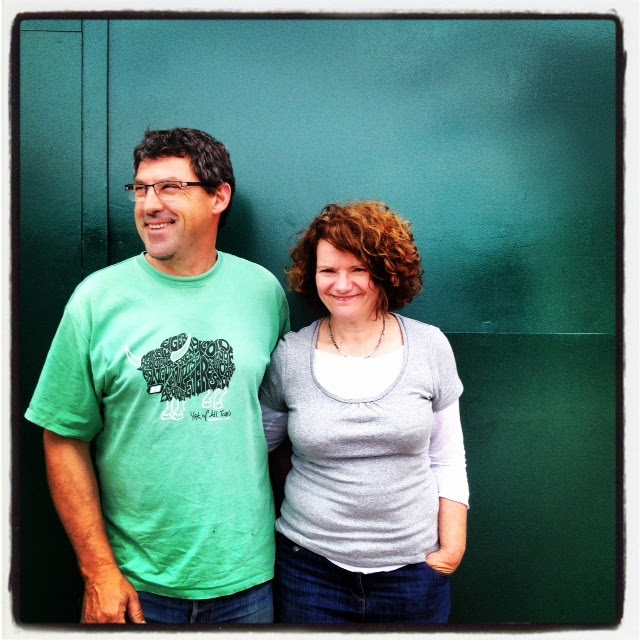 And so to the wines.  I visited Katie at her winery a few weeks ago and tasted her entire current range including her new range of pearls.

There are 3 reds - Jones Rouge, Jones Fitou and new for 2014 a 100% Syrah.
The Jones Rouge is mostly made from 80 year old Grenache Noir vines, one of my favourite grape varieties, and is a perfect complement to grilled or roast meat, especially cooked on a barbeque.
The Jones Fitou is a classic AOC blend of Carignan, Grenache and Syrah, has enormous depth and lovely balance and will definitely improve with age.
The new Jones Syrah, La Perle Rare, was a revelation.  Absolutely stupendous.  My wife, Debrah, doesn't like Syrah very much but she adores this fabulous wine which says it all really.  It's not cheap but it's worth every penny and I would buy more if I could afford it.

There are 4 whites - Jones Blanc, Jones Muscat, a new Maccabeu and an aged Grenache
The Jones Blanc is from Grenache gris grapes, another of my favourite grape varieties, is light and well balanced (as are all her wines) with lovely floral flavours.
The Jones Muscat is made from Muscat Petit Grains, is fragrant but not too sweet and makes an excellent match with Asian food.
The Maccabeu, Les Perles, is almondy and fruity but light and refreshing too.
The aged Grenache is an interesting story - made in 2009 in new oak, Katie considered it too oaky to blend and left it to one side not knowing what to do with it.  Four years later she tasted it again and it had mellowed and matured.  There was still oakiness but a lot less pronounced and better balanced with the other fruit flavours - so she bottled it and lovely it is too.

If I was to sum up Katie's wines I would say they all have fabulous balance and tremendous freshness - it goes without saying that they are all delicious and you should get your hands on some if you can, which you can do here - www.domainejones.fr/home.html 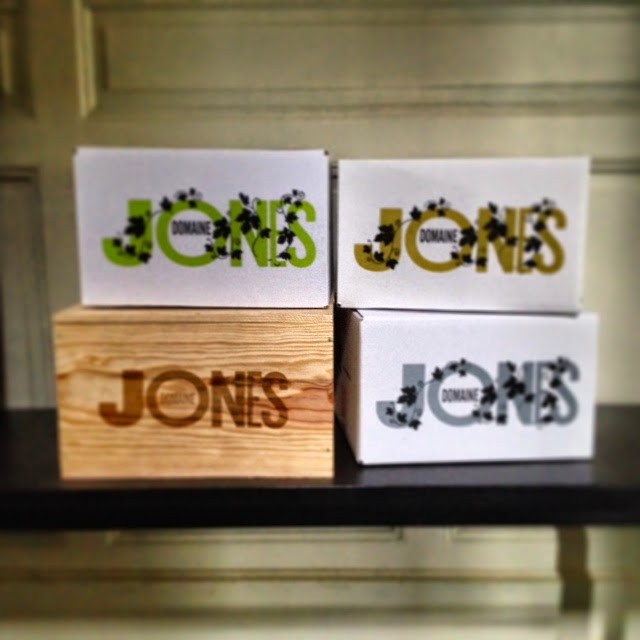 Posted by Peter Woodcock at 4:39 PM No comments:

It is actually quite easy to miss it because it is on a bend immediately after a level crossing and one is concentrating on other things just at that moment.  I hate open level crossings - despite the lights and the bells and the barriers and all the modern automated technology, I still wonder if a train is going to appear from nowhere just as I start across the tracks - so I am usually just relieved and making sure I take the bend, with a junction on it, properly rather than looking at the signs stuck on posts in the ground that decorate that corner. 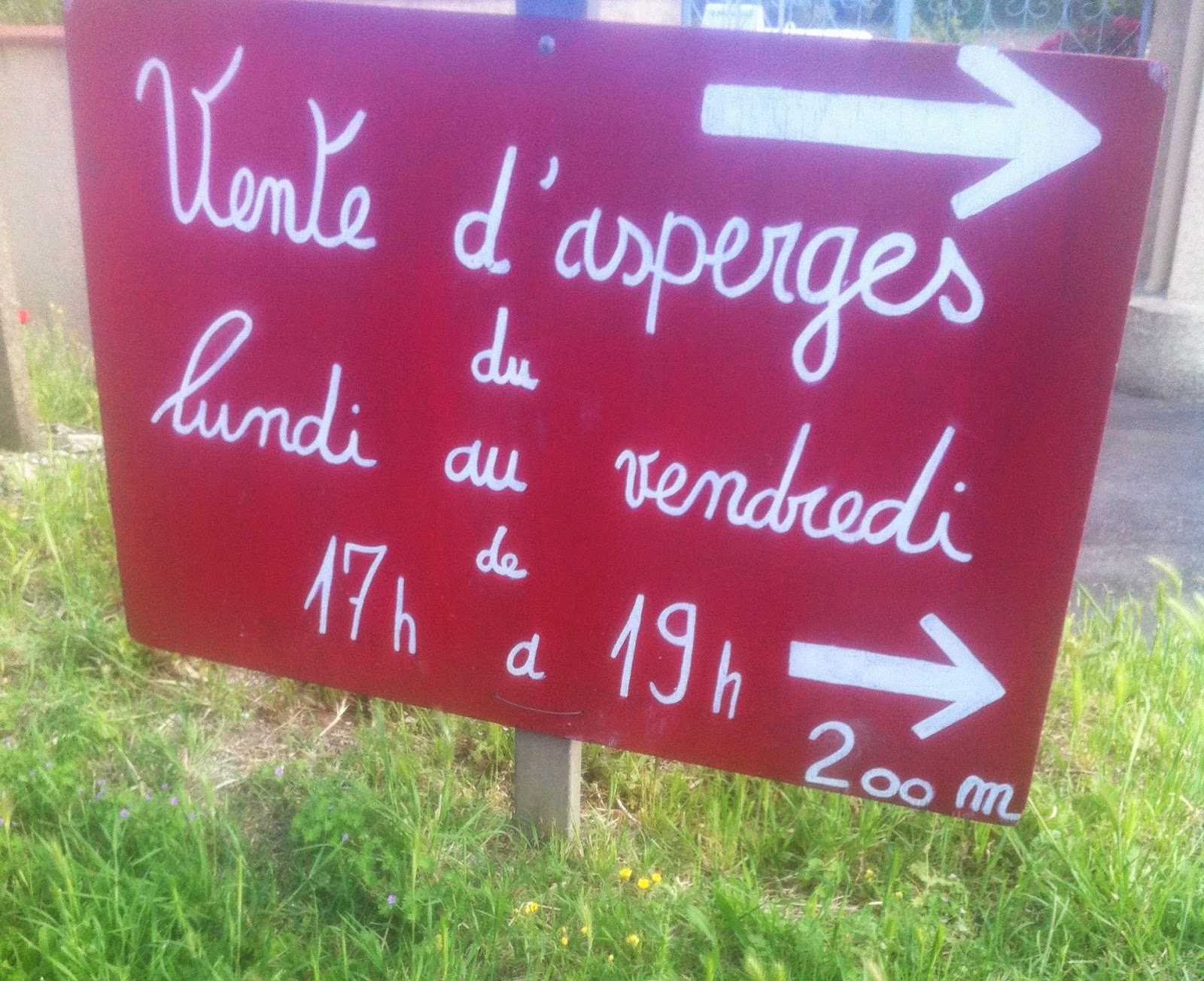 I think it was Debrah that noticed it first (she didn't have to concentrate on the driving, just the trains!) and as we were within the narrow window of opportunity to buy of 2 hours each early evening during the week, we made the detour.

The farm is located in the next village to ours, the village of Douzens. The next village in France can be the last place one would visit but Douzens and Moux seem to exist side by side with no great animosity, but then we are hardly immersed in local life, so probably wouldn't even know if there was a war going on between them!

The detour was well worth the effort.  We turned through an unflattering entrance into a slightly scruffy yard to find a charming stall erected in a farmyard with trays of asparagus sorted into small, medium or large and a very simple pricing structure per kilo for each. 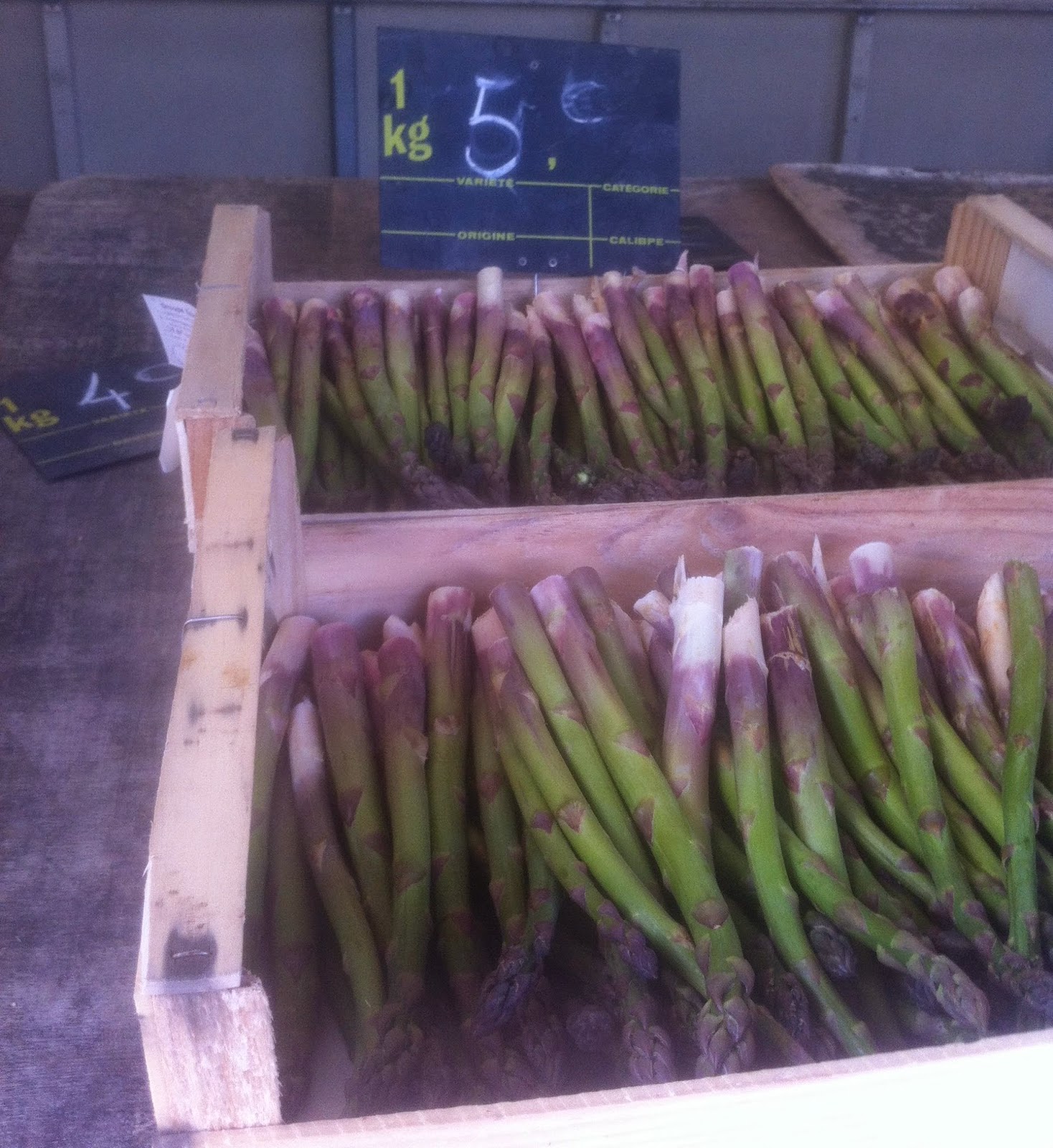 I personally prefer the medium size as I think the fat spears can be too woody and the thin ones, well, a bit thin - but they are all delicious so each to his own.  At €5 a kilo for the medium ones I am not going to complain about anything.

I adore the rustic nature of the business, the narrow buying time, the price, the hand written sign and especially the taste of their delicious asparagus.  I hope they continue to thrive and we shall certainly continue to support them with our trade.
Posted by Peter Woodcock at 12:04 AM 1 comment:

Peter Woodcock
Carcassonne, Languedoc, France
One time accountant and Finance Director in London who found his niche and passion in food and wine in France. Owner and manager of acclaimed B&B at 42 rue Victor Hugo in Carcassonne. Now, it's all about fresh seasonal produce and discovering delicious local wines.